Our workshop operates in Dafni Voiou. In our engagement with the fine arts since 1998, we have had the honor to be apprentices of great teachers and artists such as Dimitris Vassos, Dimitris Likoudis, Konstantinos Xenopoulos and the mosaic artist and teacher Nikos Stergiou.
We have had eleven exhibitions with our work at Neapolis Kozanis, Siatista, Avgerinos, twice in Dafni, Tsotili Voiou, Ptolemais, Nafplion, at the Vafopoulio Art Center and at the Officer’s Club in Thessaloniki, at the Museam of Balcan Warfares in Gefyra Thessalonikis, and we participated in the biggest ecclesiastical art exhibition in Greece, namely “ORTHODOXIA”. We have had participated in more than 35 collective exhibitions, most of them with the Eordea Fine Arts Friends Club and Painters of Northern Greece Club.
Our work had been exhibited in large showrooms such as the Warfare Museem of Athens, Vafopoulio Institute, the International Exhibition Center in Thessaloniki, Helexpo, the Lazarists Monastery, Officer’s Club, the Museem of Balcan Warfares in Gefira Thessalonikis and more.
Our work has been adorning a number of churches, Saint George in Lesvos Island, Saint John the Merciful in Thessaloniki, Saint Panteleimon, in Athens, in 401 Hospital in Athens, Saint Athanasios in Tsotili, Saint George in Mintilogli Ahaias, in Fotolivous in Drama, Saint Demetrious in Xatzi Messinia, Saint Nektarios in Astros Kinourias, Saint Athanasios of Agiasma, a work in progress, and in private collections in Athens and abroad.
We have also had constructed the mosaic emblem of AEK FC team, which will be embedded in the entrance of the new stadium the team is currently building in Athens.
Our work involves mainly the art of iconography, (portable icons and frescoes in churches), the mosaic art, the engraved mosaics, (engraved wood in the form of mosaic, which is colorized and bears a resemblance with the original mosaic artwork, a technique of our invention) as well as the secular painting.
John Papaadopoulos has precide the Eordea Friends of the Visual Arts “Aris Garoufallidis” for three consecutive terms, and he is also member of the Painters of Thessaloniki and Northern Greece Club. He had teach the art of mosaic in the workshops of Eordea Friends of the Visual Arts and of the Eordea municipality, as well as in a number of mosaic art seminars conducted by the municipalities of Voio and Ptolemais.
Workshop Manager
Olga Koskeridou – Papadopoulou 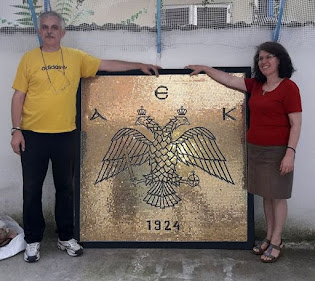